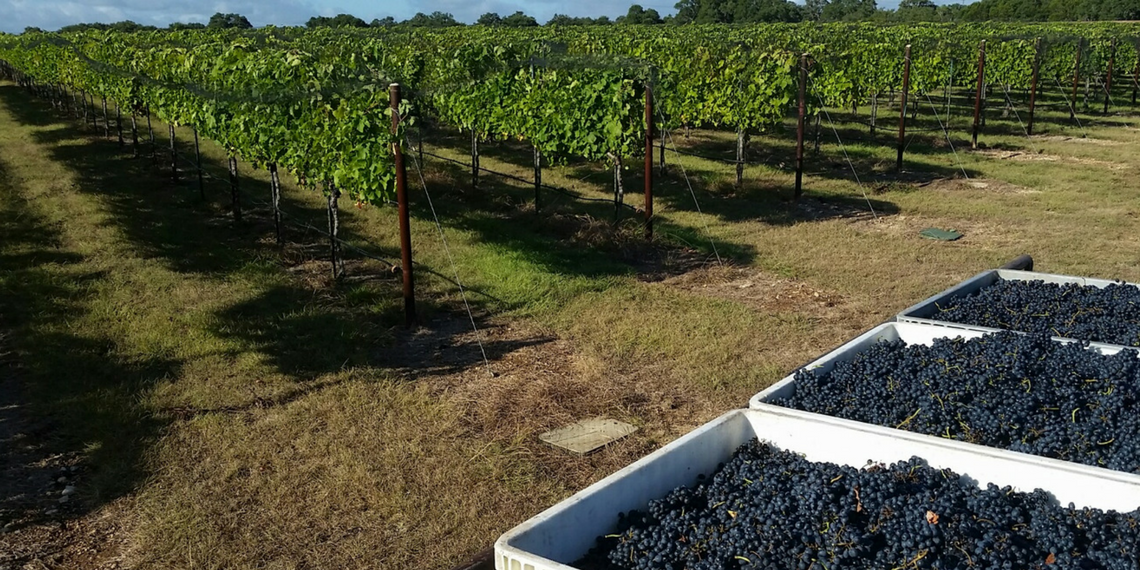 Since the 2013 vintage, this is my 4th harvest as Director of Winemaking at FALL CREEK Vineyards, and now that we have the 2016 vintage in the winery, it is the proper time to look back over the past several months. While some fermentations are still lingering, our memories of the various stages of the season are very fresh. My harvest report will review the season in the context of the last three years in order to get a more in-depth perspective.


Weather/precipitation
During most of last spring and early summer, we constantly were consulting with the weather man to be aware and prepared for the changes in the weather. Watching vineyards get soaked by rain and lightning dance through the skies was all too familiar. Similar to the 2015 harvest, this year’s first part of the season was very wet.

On the figure below, the rain events are shown in inches every day from Jan 1st to Aug 31st., during 2014 to 2015 seasons, as recorded in the Dripping Springs weather station which covers the Driftwood area, where we harvest grapes. It is clear that 2014 marked the ending of the long drought central Texas has experienced for the past seven years. Interestingly and fortunately, the last two wet seasons lasted only until June, and the period that followed was pretty dry, which coincides with the grape’s ripening phase. It is good to have a steady warm dry period for quality, as it will be explained below.

The second part of August 2016, however, looks totally unusual, and it might have forecast not the best scenario for the grapes which were still hanging. Fortunately for us, the period that preceded that week long storm was dry, and the weather condition was good enough to allow us to wrap up harvesting all the grapes in the area. In fact, the rain started on the 14th of August, and we picked the last load of grapes on the 13th.

In terms of total rainfall these last two years, we have had more rain than normal for the first eight months of the year as can be seen in the figure below where the cumulative monthly inches of rainfall up to August is reported. As I mentioned, in this last month of August alone, we had 12 inches of rain in the area, which left a big question mark for those grapes which had not yet been picked.
It is good to point out, though, that there is no such thing as a normal year, since normal refers to an average of long term data. If there was such a thing as normal daily weather, the case would be such that it would rain a little bit every single day of the year, and we all know that’s impossible. Nevertheless, it is still a good indicator of the bulk volume of rainfall for a given region.

So, what is the effect of these rains on grapevines? Well, there are stages during the season when plants need to grow and develop and times when they just need to concentrate their efforts on the clusters. Below is a scheme of the phonological stages of vines. From stage 1 to 33 they need to expand their shoots and develop. After that which is marked by veraison (the change of color of the grapes), vines simply need to stop growing and divert photosynthesis production from new tissue to grapes. This simple change in behavior is one of the most important elements which predicts the quality that follows.

The onset of such a phenomenon, also considered the onset of ripening, is very well aligned with temperature and the availability of water and nutrients. If the vines experience too much water and nutrients, then, the more difficult it is to accomplish a good ripening period. This is why it was very important to have that dry period starting just before veraison this and previous years. The plants had more than enough water to grow when it was needed the most and scarcity of water when it was not needed. In fact, it became so dry we had to irrigate the vineyards, in order for them to survive and do well, which is a standard summer practice.

On the other hand, although we were not affected by them, the late August rains could have meant a delayed ripening and the threat of fungus diseases. So we can consider ourselves very lucky.

As shown in previous posts, the table below shows the Growing Degree Days (GDD) accumulation zones as described by the two authors. The numbers indicate the summation of daily average temperatures minus 50ºF for a period of 7 months. I showed this scale the last two years, but I think it is good to refresh the context. This year, counting from April to August, there were 4,240.5 GDD accumulated in Dripping Springs, which is enough to fall into Zone V in the table. The fact that the scale includes a longer period (April to October) addresses the authors’ opinion about how correct GDD are in predicting plant growth. Because, at the end of the day, we see varieties being harvested at an equivalent heat accumulation index in the Texas Hill Country as compared to other cooler regions where this system was established. So, more important than the growing season length is the actual number of Growing Degree Days accumulated.


All in all, this season was a mere 2.2% cooler and 1.9% warmer than last year and the long term average, respectively, (again, this is up to August). This is why most of the varieties kept their usual harvest dates within a reasonable range.

Over the last three years we can see that give or take the seasons, we have been pretty much stable in terms of GDD, as it can be concluded from the two charts below, where at the end of August all seasons reach a very similar number.

One down side of the season was a frost period we had before it all started. March 20th and 21st were just cold enough to affect early bud breaking varieties, like Tempranillo and others. Then, on March 25th we had another hit of low temperatures. These low temperatures may have varied in different sub-valleys within the Hill Country, but overall the temperature contributed to a low yielding year.

Tempranillo, Salt Lick Vineyards – We are extremely excited about the 2016 Tempranillo from Salt Lick Vineyards. Like in 2015, this was the first red variety harvested this year. We harvested two separate blocks of the vineyard on August 4th and combined them in the winery due to small yields. Near-perfect ripeness was achieved at 25.1 brix and 4.11 pH. During the 19-day fermentation, special care was given to this highly tannic variety to encourage supple and delicate tannin extraction. The resulting full-bodied wine has complex flavors of mocha, chocolate, earthy spices, and dark fruits, and it has the potential to be our best version of this Spanish variety to-date.

Syrah, Salt Lick Vineyards. Our second red variety to bring into the winery was the 2016 Syrah from Salt Lick Vineyards. This at times fickle variety came in impeccably ripened at 25.0 brix and 4.08 pH. The must was fermented in one of our stainless steel tanks, where it remained for 28 days. The combination of high quality and long maceration time resulted in a big wine loaded with crushed violet, jammy plum, and velvety tannin. The wine is intricate and balanced on its own, but it will also be an excellent component to our 2016 FALL CREEK Vineyards GSM blend.
Sauvignon Blanc, Mesa Vineyards.- I would find it difficult to find another Sauvignon Blanc vineyard with 23 days on or above 100ºF under its belt during the growing season and yet be able to produce such a lovely wine. To add to the context described above, this vineyard was harvested right at 3,120 GDD, which was reached on July 26th, falling right in-between regions II and III on the Winkler scale. At print time this wine is kept cold over its fine lees, and we are sure it will make another astonishing wine this year.
Chenin blanc, Mesa Vineyards. Just like the Sauvignon blanc, Chenin Blanc finds Pecos County its perfect home. Over the years it has shown great consistency. Chenin Blanc reaches such high quality that we decided this last season to introduce a 2nd vinification: FALL CREEK Vineyards dry Headwaters Chenin Blanc as a tribute to its potential. This year is no different. Lovely fruit character, lots of concentration and elegance. I can’t wait for you to taste this new vintage!

Mourvedre, Salt Lick Vineyards. Another component of the future 2016 FALL CREEK Vineyards GSM, the 2016 Mourvedre from Salt Lick was the third red variety harvested. This is a Spanish grape, like the Tempranillo, that seems to tolerate the Texas heat remarkably well. The grapes were fully ripened at 26.3 brix and 4.03 pH. They were brought to Fall Creek on August 12th, just before the heavy August rains began. The wine has developed everything you would want from a Mourvedre throughout its 25 days in tank. Meat, earth, and subtle hints of guava and passion fruit are a few characteristics that mark this medium-bodied wine as a must-try from the 2016 vintage.

Grenache, Salt Lick Vineyards. The Grenache from Salt Lick Vineyards was the last red variety that we harvested for the 2016 vintage (August 13th). Last year, we used this fruit to make an internationally awarded GOLD medal FALL CREEK Grenache Rosé, but this year we felt that it had enough color and fortitude to be made in a red wine style. The sugar accumulated to 24.2 brix, while the pH reached to 4.20 at harvest time. After 24 days in tank, the resulting wine is a light-medium bodied wine with notes of graham crackers, maraschino cherries, and strawberries. Look for this wine to make an appearance as the third variety in our 2016 GSM.
Finally, as described, we just finished another tricky year. This 2016 season kept our hopes up for a higher crop yield, until the grapes were finally harvested and suddenly we realized shorter than usual days in the field. Anyway, Mother Nature takes and gives, I guess, and we need to be thankful of the good quality which in the end is what contributes to the prestige of FALL CREEK Vineyards Texas wines.

The same is done on the whole Apr-Oct period in order to get the total GDD of a particular area.

It is assumed that below 50ºF plants stop growing metabolism, that’s why GDD is considered an accumulation of plants active heat and helps quickly describing an area in terms of temperature. It is not meant to be final as there are other more complex models that take a number of variables like latitude, humidity, winds and more, but it’s a simple and easy tool to use.